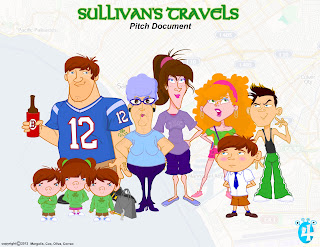 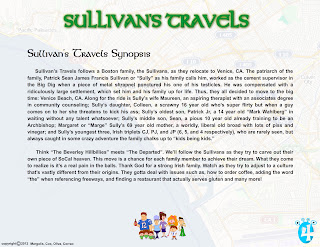 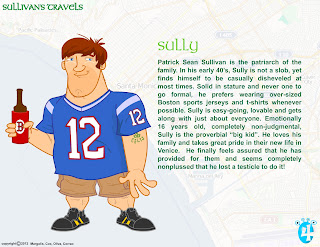 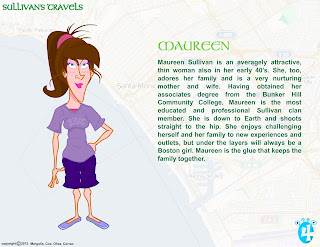 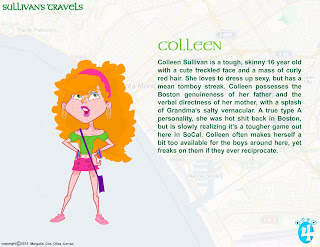 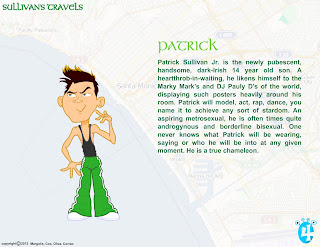 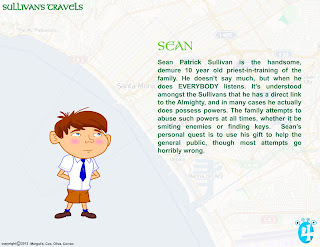 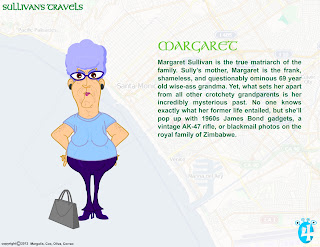 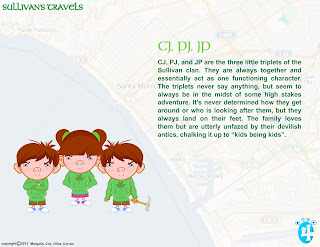 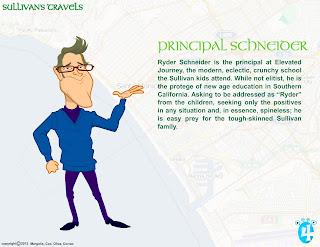 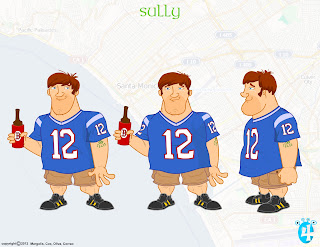 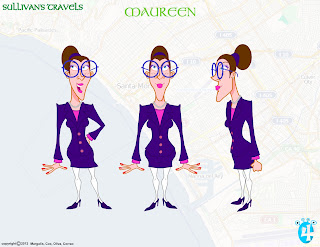 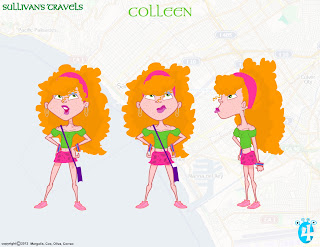 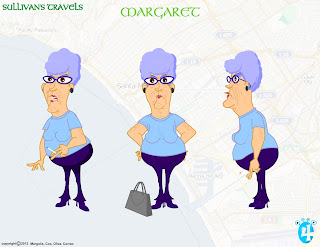 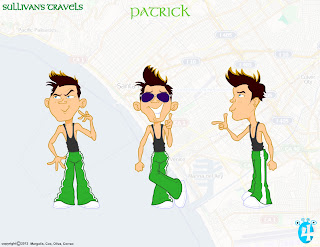 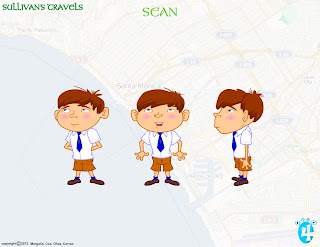 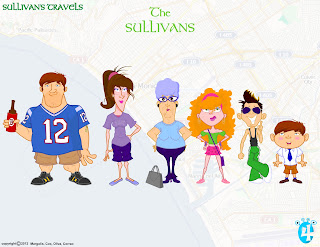 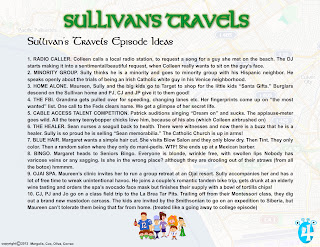 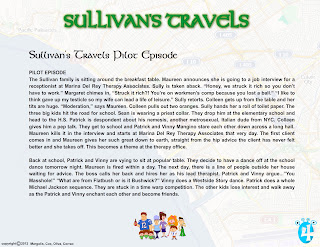 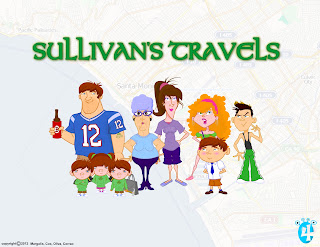 Posted by Joe Corrao 4 Eyed Animation at 10:10 AM No comments:

Email ThisBlogThis!Share to TwitterShare to FacebookShare to Pinterest
Labels: bible, the sullivans

The Sullivans: Other Characters 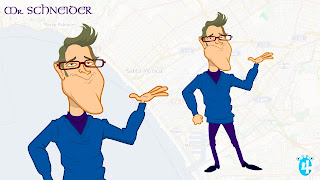 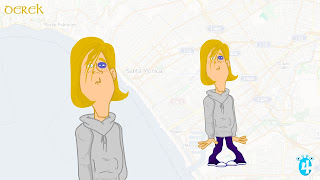 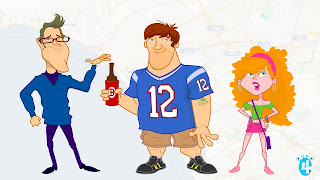 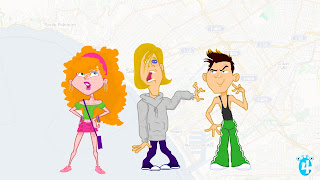 Posted by Joe Corrao 4 Eyed Animation at 9:27 AM No comments: 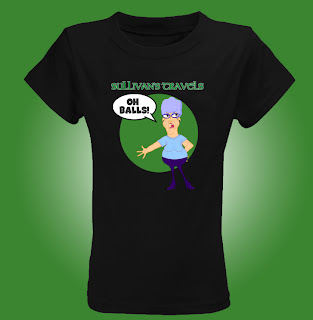 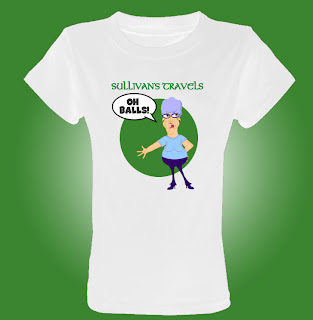 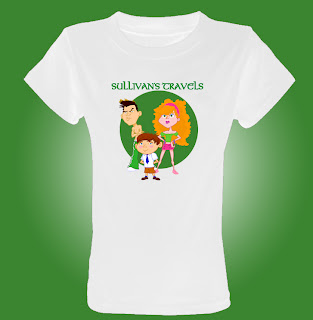 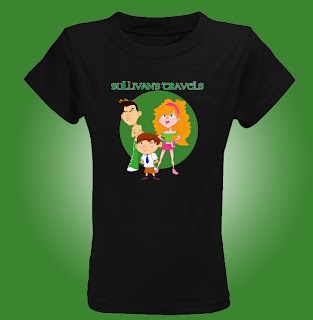 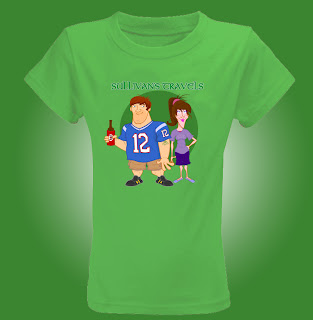 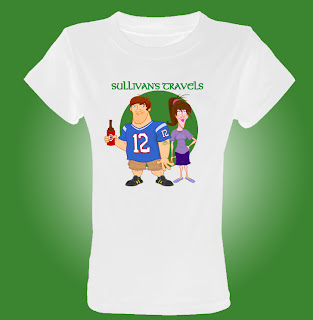 Posted by Joe Corrao 4 Eyed Animation at 11:52 AM No comments:

Sullivan’s Travels follows a Boston family, the Sullivan's, as they relocate to Venice, CA. The patriarch of the family, Patrick Sean James Francis Sullivan or “Sully” as his family calls him, worked as the cement supervisor in the Big Dig when a piece of metal shrapnel punctured one of his testicles. He was compensated with a ridiculously large settlement, which set him and his family up for life. Thus, they all decided to move to the big time: Venice Beach, CA. Along for the ride is Sully’s wife Maureen, an aspiring therapist with an associates degree in community counseling; Sully’s daughter, Colleen, a scrawny 16 year old who’s super flirty but when a guy comes on to her she threatens to kick his ass; Sully’s oldest son, Patrick Jr, a 14 year old “Mark Wahlberg” in waiting without any talent whatsoever; Sully’s middle son, Sean, a pious 10 year old already training to be an Archbishop; Margaret or “Marge” Sully’s 69 year old mother, a worldly, liberal, old broad with lots of piss and vinegar; and Sully’s youngest three, Irish triplets CJ, PJ, and JP (6, 5, and 4 respectively), who are rarely seen, but always caught in some crazy adventure the family chalks up to “kids being kids.” T

Think “The Beverley Hillbillies” meets “The Departed. We’ll follow the Sullivans as they try to carve out their own piece of SoCal heaven. This move is a chance for each family member to achieve their dream. What they come to realize is it’s a real pain in the balls. Thank God for a strong Irish family. Watch as they try to adjust to a culture that’s vastly different from their origins. They gotta deal with issues such as, how to order coffee, adding the word “the” when referencing freeways, and finding a restaurant that actually serves gluten and many more!